In late 2017, Historic Fleming Field at the South Saint Paul, Minnesota airport pursued a roof replacement as part of a larger initiative to protect their buildings and their valuable contents. Fleming Field’s six quonset buildings – built in the World War II-era – are wooden structures said to have been built by Cadets-in-training for the United States Armed Forces.

Previously, in 2013, All Elements installed a 40-mil white Duro-Last PVC roof on another building on the premises. This building had two quonset barrel roofs and a flat roof connecting the two. Because they were pleased with our workmanship, the Historic Fleming Field airport manager once again looked to All Elements for solutions. The 2017 project eventually went out to bid – a bid which All Elements won. We repaired wind damage to the shingle roof on the terminal building, we replaced “eyebrow” roofs over the hangar doors with Owens Corning shingles and we covered enormous barrel roofs in Duro-Last.

Dan Lageson and his large crew not only used fall protection harnesses but they also used rock climbing harnesses to repel down the sides of the buildings. The crew efficiently installed fasteners to hot air-welded rolls of PVC membrane. The hot air welding facilitated the tie-ins to two flat roofs and a dormer, yielding a seamless Duro-Last roof. 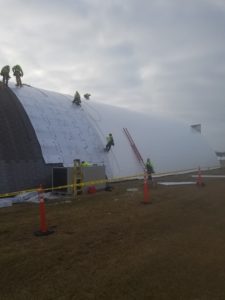 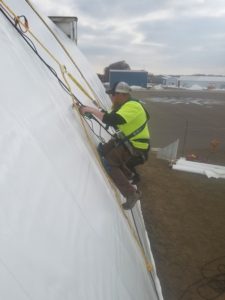 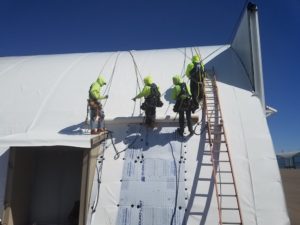 Throughout this project, continuous communication and coordination was mandatory. We didn’t want to vibrate the building or drop anything and risk it landing on the tenants or on the hanger’s valuable contents. Dan Lageson kept in touch with Airport Manager Joe Carney on a daily basis, informing him of the current day’s plans and specifying what needed to be moved around inside the hangers. In the end, we finished the job ahead of schedule and without incident to the buildings or their contents.

The Historic Fleming Field project truly exemplifies Duro-Last’s slogan: Edge to edge and deck to sky. The buildings are over 30 feet high and 150 ft long and the barrel roof, if flattened, would be 115 ft wide. Looking up from the bottom it appears the roof membrane extends all the way to the sky. 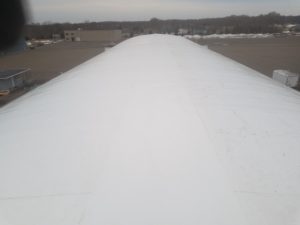 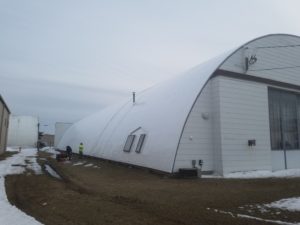 “The 20-year warranty, which includes 15 years of consequential damage coverage, is invaluable in an application like this,” said John Thurber, President of All Elements. The contents of the hangers are airplanes as well as airplane components. The hangers house an upholstery shop, a manufacturer of pontoons and amphibious gear, historic and commemorative aircraft such as the B-25 Miss Mitchell and countless airplane parts.

The 6 quonset-shaped barrel roofs at the South Saint Paul Airport make Fleming Field distinguishable to pilots as they navigate the numerous Metropolitan airports. We are humbled by the role we played in helping protect these unique buildings for years to come. 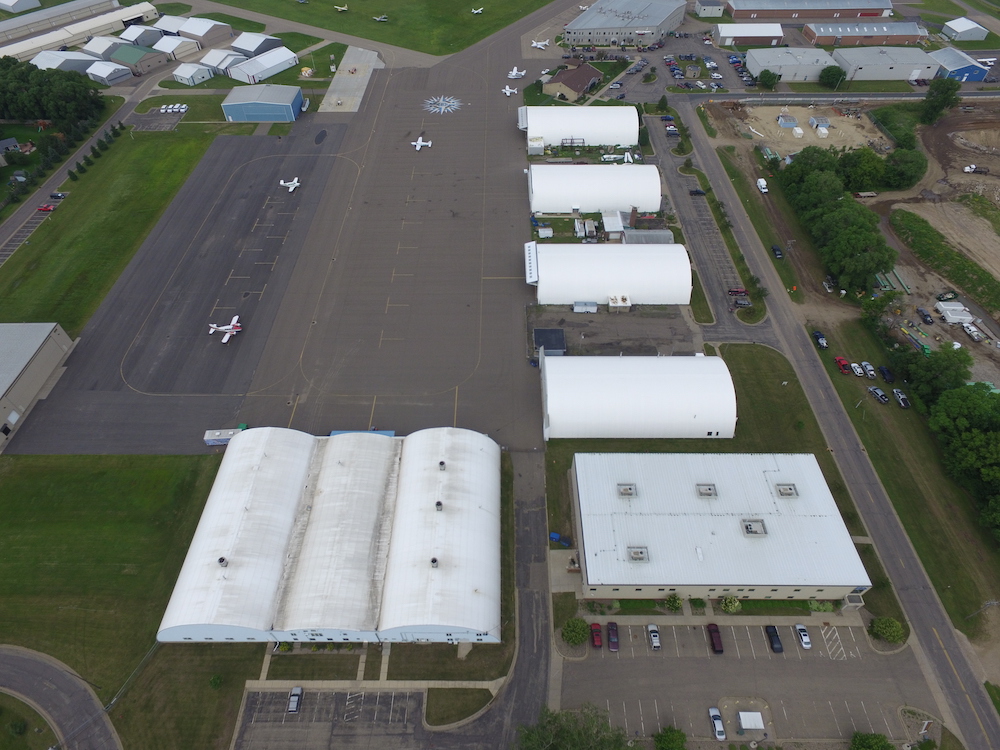 Do you have a unique roof in need of repair? We’d be happy to come take a look and see if Duro-Last has a solution that will work for you. Contact us today!