Fargo, North Dakota is booming. They’ve been riding sustained growth for over a decade, in economic and cultural terms as well as population. 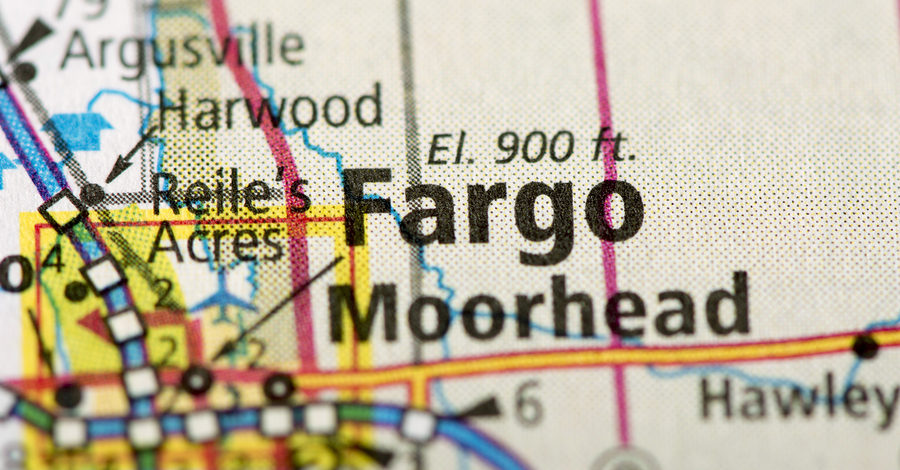 Education, technology, business, healthcare and agri-business contribute to the thriving of the Fargo-Moorhead area. Forbes magazine has done its share of gushing, naming Fargo one of the “Best Small Cities for Business and Careers” as well as one of “25 Best Places to Retire.” The heart of the city is the historic downtown, where unique vintage buildings are being converted to residences, new condos and apartments are rising, and craft food and cocktails are feeding a resurgence of arts and entertainment. 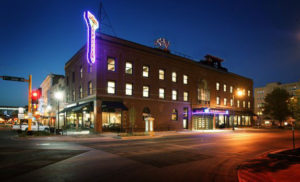 Hotel Donaldson, a stately three-story brick edifice, anchors the trendy core of downtown Fargo. Now an upscale hotel, it was built in 1894 as a two-story ballroom for the Independent Order of Odd Fellows. Around 1914, Horace Donaldson purchased the building and converted it to a hotel. It’s been hosting guests since then, with a brief hiatus for renovation from 2000 to 2003. 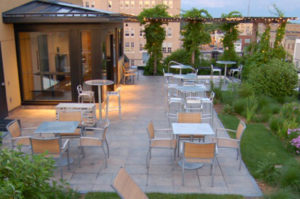 Restyled into a posh, fashionable boutique lodging, Hotel Donaldson displays original art throughout the hotel and offers artisanal flavors in its HoDo Lounge and HoDo Restaurant. There are meeting rooms, live music and their roof is a great attraction, with a hot tub for guests and a cocktail bar with amazing drinks, fabulous views and really great landscaping. Yes, the rooftop garden has arrived in Fargo, North Dakota. 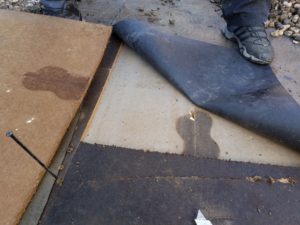 I first met Tanner Tweten, manager of the Hotel Donaldson, at a Fargo Chamber Business After Hours event in March of 2017. He shared that the Hotel had suffered a nagging leak, frustrating management for at least three years. They had engaged several roofing contractors, as well as the architect of the renovations, to find why and where it was leaking, without success. Tanner wondered whether All Elements would be interested in taking a look. I thought, “sure, we can fix that.”

Little did I know what I was walking into…

Loss of Use of Hotel Room an Unwelcome Expense

The persistent and mysterious leak had a big negative impact on Hotel Donaldson. It was a daily nuisance, and an economic drain.

Each day someone would check the room and see if the leak was active. If so, the staff would grab the carpet fans, buckets and other cleaning materials they kept permanently stocked nearby and immediately address it. This was an unwelcome labor expense, as well as a simple pain in the you-know-what.

It also meant the room could not be rented out reliably. With only 17 rooms in the hotel, the loss of one room from circulation represented a loss of nearly 6% on a fully booked night and that lost income is not good!

They had also put plenty of money into repairs and mitigation. Over the course of three years, the sheetrock ceiling was replaced so many times that they finally installed an access panel so they could check the status of the leak and quickly deal with it rather than wait for visible damage to the ceiling. The sheetrock had been replaced so many times by the time I saw it, the maintenance team had stopped counting at ten. Another unnecessary financial drain!

All Elements showed up for our initial inspection. We discovered a ballasted rubber roof with tall walls covered in architectural sheet metal panels, a railing mounted to a low wall, and parapet cap metal. There were also heating and air conditioning curbs, and the problem area saw high traffic area for a number of activities at the hotel. All of these factors contributed to the perfect scenario for a nagging leak that became the bane of the staff’s existence, interfering with their day-to-day activities.

There was good news, too: the construction of the building. With an open air space between the ceiling and the roof deck to ventilate any moisture, and a wood plank roof deck and wood trusses that dried when ventilated, the Hotel Donaldson was fortunate that persistent moisture was not an issue, and there was no structural degradation, no mold and no rot. 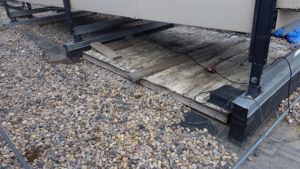 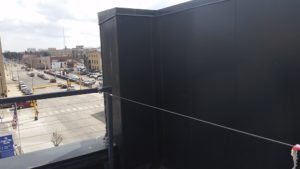 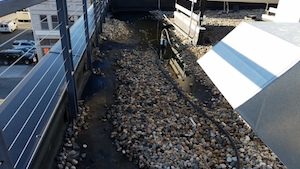 After the initial examination, All Elements and the Hotel Donaldson leadership decided to take a step-by-step approach to diagnosis and repair.

Matt Gill and Rob Petterson started with a thorough examination of the leak area, removing flashings and architectural metal wall panels to see if there was evidence of leaking behind them. 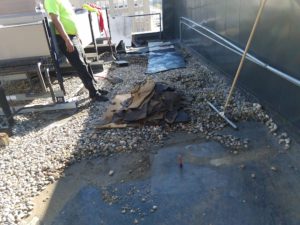 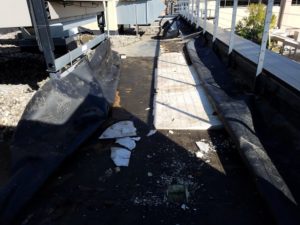 They continued looking around the interior and exterior parapet wall, and also along the railing and the curbs of the HVAC units. While taking a break and looking up at the building Robbie asked, “why is there a big hole in the side of the building?” It seems that somewhere along the way, someone forgot there was a scupper in the building that was covered up from the inside but not the outside. This clearly needed to be resolved, but leaks that occur over years are not typically that obvious. We closed up and insulated the open scupper (see below), which did slow the leak but did not make it go away. 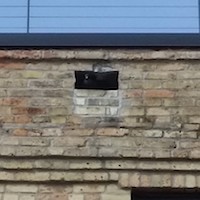 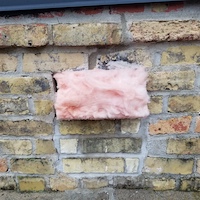 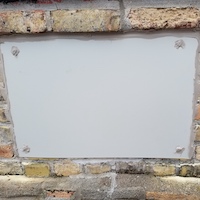 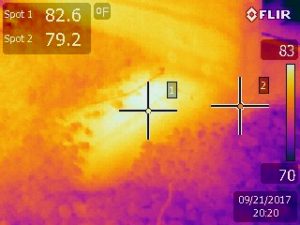 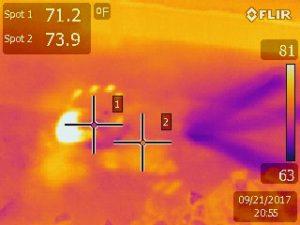 The next step suggested was a thermal imaging examination. Thermal imaging on a ballasted rubber roof requires the ballast to be shoveled aside a few days in advance. The most effective time to image a roof is after sundown. When the roof begins to release the energy from the day, the saturated areas of the roof register a different temperature than dry areas. That’s exactly what All Elements did–showing up at the hotel one summer evening around 10 p.m. and performing a thorough examination of the area. Thermal imaging revealed NO temperature difference in the area of concern. No diagnostic resolution there.

Visual Inspection Reveals Cause of Leak

After the inconclusive thermal imaging scan, we reverted to good old fashioned roofing detectives. One morning in late summer we simply cut open the rubber roof to examine what was going on. 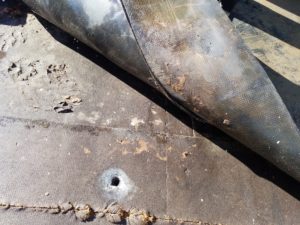 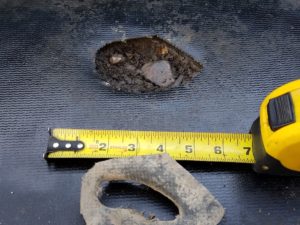 On that sunny morning we made several 30-foot cuts into the rubber membrane and peeled it back. Once the membrane was removed, the “what” and “where” became obvious. All Elements found two puncture marks near an air conditioning unit, one small and one about 3 inches long. We also discovered a mystery leak where there was no indication on the top side of the membrane, but underneath the wood fiber was saturated. Satisfied with the results of the examination, we sealed up the roof and made plans for a permanent solution to correct these problems… Very involved plans indeed.